A decent performance in tricky conditions. Marine keeper made three top class saves early on, including tipping over a screamer from Billy Akrigg, but could do nothing about Reece Pearce's low shot just inside the post. A Dodger kamikaze special then conceded a free kick from which the ball ricocheted around the goal mouth and in: apparently an own goal. Killer on at half time, scored from a seemingly impossible angle, and was then denied by another excellent save. Sam Bailey received two yellows for fairly innocuous fouls, the referee taking little account of the conditions. Marine managed by ex-Dolly Carl Macauley, and brought quite a few fans, a nice friendly bunch.

Surely we should fully commit to this competition now being in the quarter finals? I know we put a strong team out tonight but I mean in terms of general attitude throughout the club. One of those things, bit like the JPT for FL clubs, you're not that arsed about it until you get to the latter stages.

Granted, tonight's conditions will have put off the most ardent of supporters. Fair play to us lot that did make an appearance! (Blatant self appreciation

Great win that earned the club £250 in prize money. Got a lot of great photos from it! I might get some of them framed. 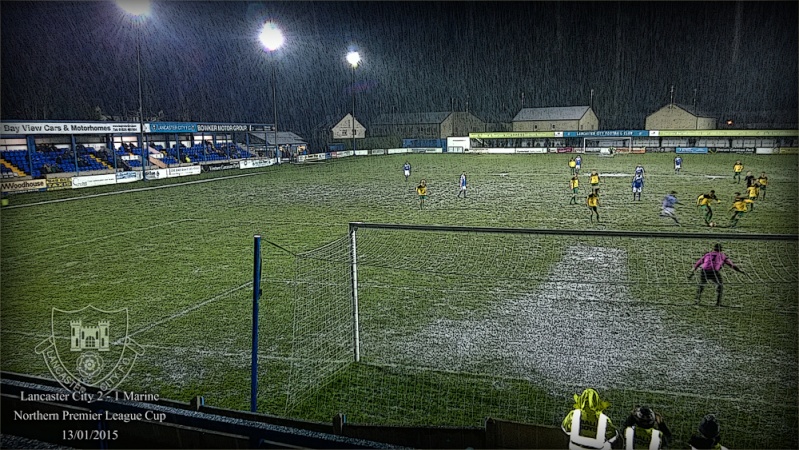 A good display, with the team showing a lot of spirit in freezing conditions. Killer came on at half-time and looked quite sharp - it'll be great to have him back full-time. The most promising attacks mainly included Reece Pearce, my man of the match - he looks a very good prospect for the future, if we can hang on to him.

I thought it was a very good performance in the conditions against a team a league above us who certainly came to win. All the team is now looking for the ball and working very hard. Now there is always somebody looking to receive the ball and not leaving his team mate panicking. Some passes did go astray or was miss controlled but you have to remember this is non league football.
Reece Pearce had a very good game but my Man of the Match would be Billy Akrigg who never stopped running. He is good bringing the ball forwards and once we have lost it always chases back. It was good to see Tom back 2nd half but he did not look match fit yet to last 90 minutes. Probably 30 minutes would have been better for him. When everybody is fit I can see Darren having a problem who to leave out. Will our luck hold for another home draw.

Who are the nine "dedicated" Dolly Blues braving the elements featured on the picture on Twitter?

I'm one of them - on the right, a couple of steps below the others. The snowstorm was quite brief and genuinely enjoyable to be in.

I'll be at the next round, to join the cup fever!!

You watch now, we'll be draw away, are LYN still in it?!